Breakfast at Trouts Place: The Seasons of an Alaska Flyfisher Ken Marsh 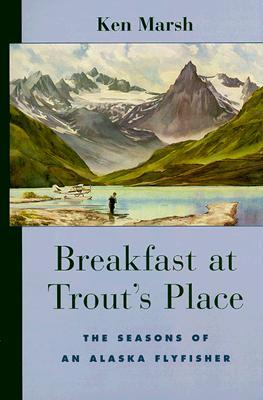 The secret lay in a wisp of a game trail, known only to the hard core, that threaded for a mile through dense black spruce that bristled with the blond, frizzy shoulder hair of passing grizzlies. Often, you could hear silvers before you saw the creek, rolling, tailing, swirling, as silvers will, in the quiet water.From a roadside cafe with huge rainbows covering the walls to a remote fly-in shanty a willowed mile from an unexplored river that might hold steelhead, Ken Marsh will take you on a flyfishing adventure as only a native who has lived and flyfished his entire life in Alaska can.You wont find a catered, cozy flyfishing camp with protective, professional guides in these stories.

Instead, youll join Ken and his sometimes crazy, always interesting friends as he flyfishes through the seasons in the real Alaska. For the anglers who live there, flyfishing is much more than the salmon and big rainbow fishing the outsider rushes in to do. Its quiet evenings float tubing for grayling and flyfishing adventures after prehistoric pike. Its investigating rumors of steelhead and prowling coastlines for sea-run cutthroats.Most of all, its a search for solitude, for the untrammeled, and for a place where angler and fish can meet in one moment that cant be taken back or forgotten.

Its the same search all flyfishers are on, but the scale is, like the state itself, much grander than those in the Lower Forty-eight can grasp during a two-week, color-brochure trip.

Comments
Comments for "Breakfast at Trouts Place: The Seasons of an Alaska Flyfisher":