Inside The Spaceships George Adamski 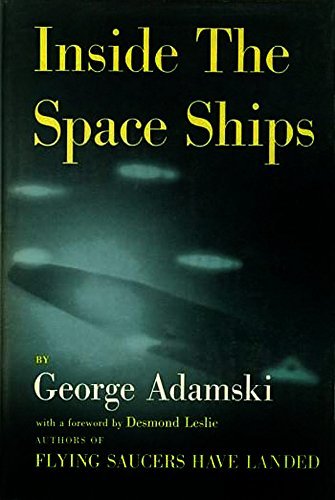 Since the memorable November 20, when he first made personal contact with a man from another world? Since he was able to make photographs within 100 feet of the same saucer that had brought his original visitor?Inside The Space Ships is Adamski’s own story of what has happened to him since then. It begins with his first meeting, a few months later, with a second man from another world — his first meeting with one who speaks to him. This second visitor brings him to a Venusian Scout (flying saucer) and this, in turn, brings him to a mother ship.

Later lie is conveyed in both a Saturnian Scout and a Saturnian mother ship. Adamski tells us what transpires in these space craft and what the men and women from other worlds have told him.Adamski’s photographs of flying saucers, originally published in Flying Saucers Have Landed, have since become world-famous as other witnesses in other parts of the world have succeeded in taking photographs identical with his.Adamski’s first book, Flying Saucers Have Landed, has now sold over 80,000 copies in the United States alone and has been translated into Dutch, Spanish, French and most of the other European languages.

In spite of the scoffing of skeptics and the bitter and vicious attacks of opponents, a great world audience has collected to read and listen to George Adamski through the years.This is your chance to know the amazing accounts of Alien interactions registered by George Adamski. Prepared for your reading pleasure in 2015.C O N T E N T SIntroductionby Charlotte Blodget- Foreword by Desmond LeslieI - Return of the VenusianII - Inside a Venusian Scout ShipIII - The Venusian Mother ShipIV - My First Look at Outer SpaceV - Meeting With a MasterVI - Questions and Answers Within the ShipVII - The Scout from SaturnVIII - The Saturnian Mother ShipIX - The LaboratoryX - Another MasterXI - Conversation in a CaféXII - Again, the Great MasterXIII - Days at Palomar TerracesXIV - The Banquet and a FarewellXV - An Unexpected Postscript- The Authors Biographical Sketch, by Charlotte Blodget(Image on cover)George Adamski took four photographs in rapid succession through a six-inch telescope.

Space ships discharge their Scouts (saucers) through a launching chute located at center bottom. One Scout has begun to leave in the first photo. In the fourth, six have been launched.W A R N I N GThis information is too incredible to be believable!JUDGE FOR YOURSELF.Is our species in danger?Are the aliens influencing our present and future?When will there be a full disclosure?When will the human population knowWE WHERE NEVER ALONE?

Comments
Comments for "Inside The Spaceships":